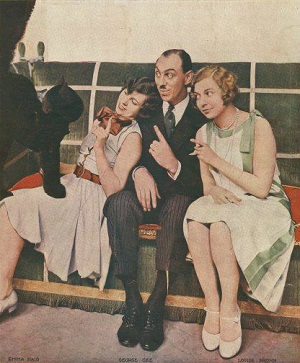 If The Garrick Gaieties was an important stepping stone for Richard Rodgers and Lorenza Hart and Dearest Enemy finally gave the pair a legitimate show with their names as the sole songwriting team on the bill, The Girl Friend cemented them in the public consciousness of 1920s America. It ran for 301 performances – a smash hit in those days – and paved the way for further musicals that would come from this pair, during which Rodgers would begin to develop some of the techniques that would eventually cause musical theatre to evolve. Directed by John Harwood, with musical staging by Jack Haskell, the show featured a book by Herbert Fields.

Musical comedies of this period are known for their threadbare narratives and this one is right up there. The rather bizarre plot of The Girl Friend starts off with a cyclist who trains on a wheel connected to a butter churn on his dairy farm! (Maybe that’s a training methodology that Lance Armstrong should have pursued to avoid his fall from grace.) The dairyman in question is Leonard Silver (played by Sammy White in the original production), who hopes to become a great six-day cyclist, winning an important race and the everlasting affection of Mollie Farrell (Eva Puck). A number of gamblers and swindlers, including a professional manager and his scheming sister, try to get Leonard to ride for them or to lose the race, but Leonard manages to win both the race and the girl by the time the final curtain falls.

To purchase the THE COMPLETE ELLA FITZGERALD SONG BOOKS, featuring the music of Rodgers and Hart, click on the image above.

Like The Garrick Gaieties, it’s hard to track down anything but the greatest hits of The Girl Friend, which makes a total discussion of the merits of its score rather difficult. As much as I would like to get my hands on a copy of the 1980s revival recording from JAY/TER, it doesn’t seem to be readily available. Of the songs that I know, I really enjoy “Blue Room”, which is given a splendid rendition by Ella Fitzgerald (see the album featured on the right). The arrangement performed by the Revellers in the YouTube clip below also offers a great interpretation of the song. Charming and sweet, “Blue Room” is a memorable little ditty from the Rodgers and Hart songbook.

On the other end of the scale – and, yes, it’s another case of this being only the least favourite of the songs I know – is “Hey! Hey!”, simply because of the silly lyrics. Here’s a sample: “Church organ music used to fill the air; now hotsy-totsy rhythms thrill the air.” OK, it works for the period, but it’s still a little silly!

Want to add your own thoughts about The Girl Friend? Share your thoughts in the comment box below.

What are your thoughts? Cancel reply